What does a nose kiss mean in different cultures?

The answer to this question varies for every culture. In this guide, we have shared the meanings of a nose kiss in cultures where this tradition is still popular. From European to Arabian Culture & to the nose kiss between a couple, know them all in the article below. 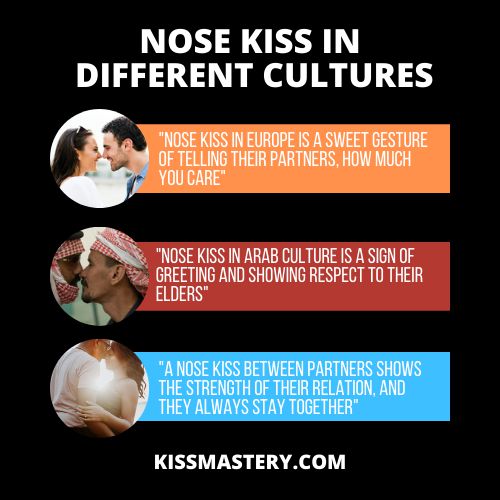 Most commonly the Arab community has the tradition of greeting people by touching their nose tips together. They show their appreciation and a warm welcome for their guests and elders. Let us now dig deep to find out more about this unique gesture.

The nose kiss, however, has recently been brought to light for a more extreme cause. As the number of victims of MERS (a SARS-like viral disease spreading in the Middle East) in Saudi Arabia is rising, some health professionals have begun to raise questions about the risks of this age-old tradition. When there is an airborne disease going around, pressing two noses to one another is not necessarily the healthiest action. Many expressed this fear, but this was just another way for many traditionalists to target the Arab Peninsula’s social identity.

Why Nose Kiss In Different Cultures?

Greetings come in all colors: touching the shoulder, kissing the shoulder, shoulder to shoulder, shaking hands, kissing embracing, and then there is the salutation of the nose. This is the type of greeting in the Gulf countries and Yemen in a variety of regions. When it began, or whether it emanated from the area or was imported from other locations, nobody knows. But what we do know is that, for at least 15 years, the nose has been charged with symbolism. 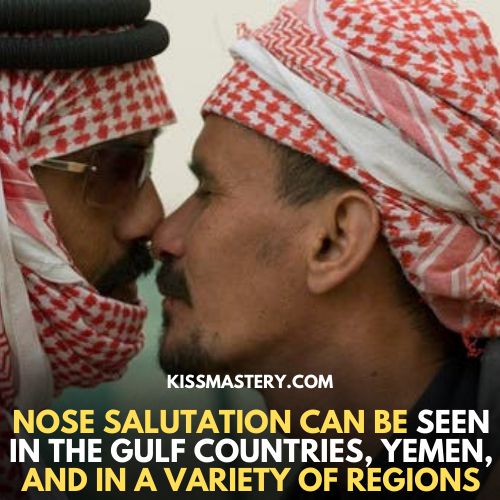 This symbolism describes the reason people “nose salute” other people. You are not merely saluting him/her when you “nose salute” someone; you are also saying something about how you relate to each other. The nose is a sign of pride, so to say you are a peer is to place your noses against each other. If you are not a peer, then the other’s nose will be kissed by him/her who is younger or of a lower status.

It is also a custom for people in the world to use the nose to salute: Mongols, Polynesians, Malays, Indians, Africans, and Eskimos, among others. But while people stub their noses against each other in the Arab Peninsula, they smell or sniff each other in other places.

A social scientist wrote a hundred years ago about how “smell/sniff me” was employed instead of “kiss me” in the Indian region of Assam. Some claim the aim is to establish familiarity and trust in the one being sniffed. Every man has faith in those of the same smell.

Some people say that the purpose is to exchange breath as a metaphor for sharing life. Animals use sniffing as a communication mechanism and it continues to be with humans as well.

What is Gogol’s Nose?

It was about 200 years ago when a Russian novelist Nikolai Gogol wrote a short story named “The Nose”. It was about a nose, which leaves its owner and takes a character of its own; even refuses to return to its body. The nose goes on to gain a social status higher than its owner does and starts looking down at him. Eventually, the nose return to its owner who walks with it ‘on’ proudly. 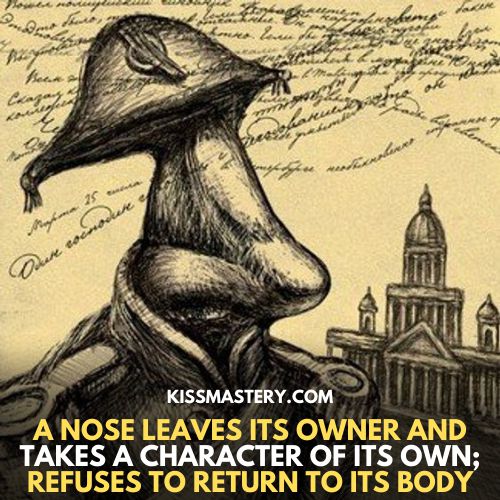 The writer was not influenced by Arabs who considered the nose as a symbol of pride, neither by other people who considered sharing breath to be sharing life. The story tells the unreasonable meaning of social life where even a nose can become a creature of status, even higher than its body.

In the random use of the nose by Gogol, we may find a clue about the origin of the use of the nose in greeting amongst some Arabs by randomness or accident. It does not matter why the nose was chosen,  and perhaps we never will know the exact answer. The writer acknowledges the nose as a presence of a random person and it does not matter if it relates it with some sort of greetings.