I’m sure you’d have been kissed many times in your life. By your parents, grandparents, or siblings. Hard to deny the fact, no? A hand kiss, or a kiss on the cheek or forehead perhaps?

There are many different forms of kissing, most of which are easy to interpret. If you kiss someone on the cheek, it is a gesture of affection; if someone kissed you on your mouth, it means you feel special to them.

But what if someone kisses you on the hand? What would that mean? What is the significance of a hand kiss?

The hand kiss is a courteous gesture, traditionally. In certain cultures, it’s a way of welcoming people like in Turkey or Malaysia. It can show one individual’s courtesy, politeness, gratitude, appreciation, or even commitment to another.

You will possibly comprehend it as a cultural welcome and nothing more if you experience the hand kiss when traveling abroad. However, it can have a different meaning when it happens elsewhere, like on a date.

The origin of hand-kissing cannot be traced easily. There are multiple sources in history. There is a reference to it in ‘The End of the Iliad’, written in the 8th century, mentioning ‘I have steeled myself as no man yet has ever steeled himself before me, and have raised to my lips the hand of him who slew my son.’

According to another source, the hand-kiss is associated, in the seventh century AD, with the advent of Islam. According to the-then traditions, Ali Ibn Abi Talib said about the kiss of the hand:

Hand kissing started becoming common during the 17th and 18th centuries among noblemen and women, especially in Spain, Poland, and Lithuania.

The Evolution of Hand Kiss Around the World

Fast forward to the second half of the 20th century when kissing the hand is still in practice in many parts of the world, here’s what we’d get:

People kiss the hands of the wives of their friends whenever and wherever they meet in Vienna.

Communist officers kiss the extended hands of the ladies as a common courtesy in Romania and Poland.

Young boys and girls are made to practice the hand kiss during their dance classes in Prague.

In West Germany, boys have to learn to hold and kiss the hand of every female they had to interact with. The girls have to practice to handle the courtesy. Elderly men whisper ‘kiiss’ die hand’ (I kiss your hand) to the women they come across without actually doing so physically.

Hand kissing is common in all the formal parties in Spain and Portugal.

American students studying in Italy are being trained to kiss the Pope’s hand.

The evolution of kissing the hands is also continuous, with the practice becoming rare in today’s world. The gesture has evolved in the Philippines to touching the hand gently to the forehead.

In Middle-Eastern Gulf countries, kissing the hand and forehead of the parents and elderly is a gesture of respect and affection.

Kissing the hands is also a common practice at ceremonies or festivals in Turkey, the Middle East, and some Eastern-European countries like Armenia. On religious holidays, the practice of hand-kissing is used as a sign of happiness. It is also done to greet or to say goodbye on formal occasions such as marriages, gatherings, henna parties, or other festivals.

What does a kiss on the wrist mean?

A kiss on the wrist is an act of passion or show of affection.

This tells a woman that the man knows what he is doing; he wants to get intimate with you, and he is willing to wait for you for as long as he can. When you get such a kiss, it is a way of him flirting with you.

How to Kiss a Girl’s Hand? – Get it Right

Kissing a hand is an art. And you need to master it. When a lady or an elderly person offers you their hand, they are probably expecting it to be kissed.

There are a few different ways to do a hand kiss and it is done only when she offers her hand herself. Make sure that the lips are dry first and you use your right hand to hold the hand of the other person.

Where should a guy put his hands when kissing?

In the modern era, the lips do not touch the hand, and rather hover an inch or so above the knuckles. This is followed when the guy has not been introduced to the lady previously. In such a formal situation, any romantic or intimate gesture could be taken as offensive so don’t be a rouge hand kisser.

2 Things a Guy Mean When He Kisses Your Hand

It all depends upon the situation and location. People may be puzzled by the meaning of a kiss on the hand.

In the past, during its advent, it was considered respectful and polite for a gentleman to greet a lady with a hand-kiss. Refusing to kiss the hand when offered was considered rude and impolite. It would mostly be considered as respectful and courteous when you are somewhere fancy. It symbolizes diplomatic gesture, respect for the elderly, or even represents a religious honor. 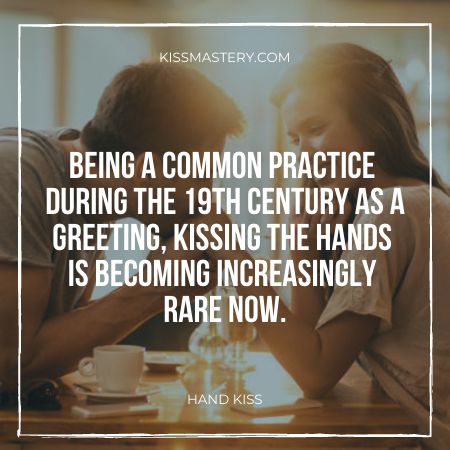 This gesture was pretty common during the 19th century as well. But it started to diminish during the 20th century.

1. Greeting – What does it mean when a guy kisses your hand?

Ever seen the movie, “Titanic”? If yes, you’d have noticed the hand-kiss being represented as a common practice of greeting in the higher class of society. Portraying reverence and admiration for the opposite gender, a hand kiss also respects the physical boundaries.

A hand kiss also shows loyalty and fealty towards an authoritative figure, like a king, a priest, or The Pope. 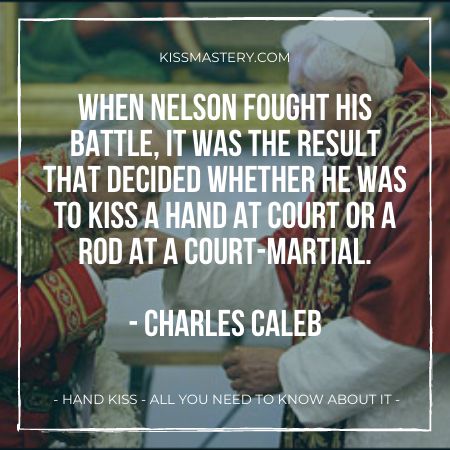 2. Portraying Affection – What does it mean when a guy kisses your hand?

However, on a date or during the normal routine between a couple, this would refer to the feelings of love and affection that the other person is feeling for you. If a man kisses you on the hand, it’s usually an affectionate expression generally wanting to show you that they can be respectful and that they know how to treat a woman. 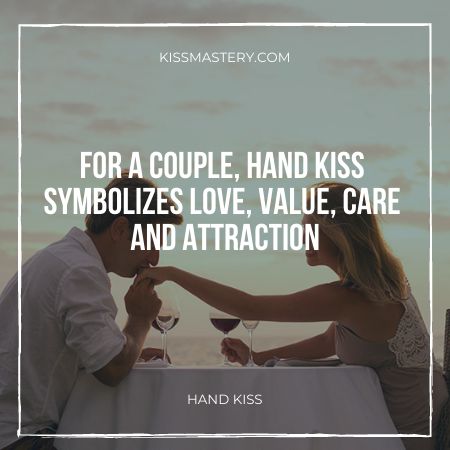 In a relationship, a guy kissing the hand on greeting or goodbye would probably mean that he’s been missing you and would keep on thinking about you even when you both are physically not together.

In daily life, it would mean that he cares about you a lot. You hold a lot of value in his life.

Hand Kiss is a sign of respect & admiration. Here are the thoughts & sayings of various people regarding Hand Kiss.

1. Never kiss a woman on her lips if you wouldn’t kiss her hand

2. However, Marilyn Monroe may agree to disagree with you. 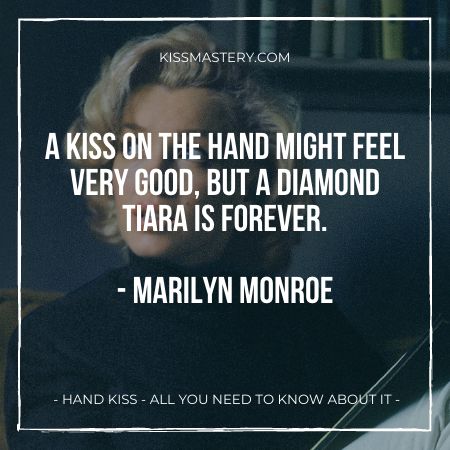 3. Shakespeare was a huge fan too, it seems. 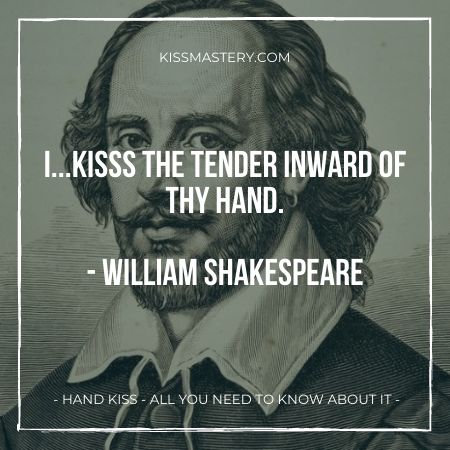 4. George Herbert completely changes the context of kissing the hand. 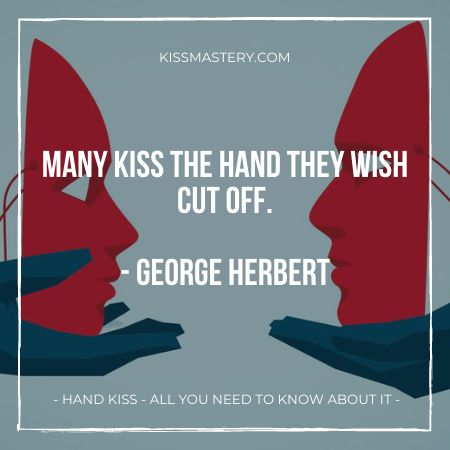 In a hand kiss, there is hardly any negative aspect. It was cherished by everyone in the past and even now when it is not as common.

So when you are kissed on your hand by guys, enjoy the moment and savor the flow of reverence and emotions. After all, who doesn’t love being loved or respected in this way?

You can share your experience with hand kisses as well in the comments section below.